An Interview with Michael Whitcombe

Michael Whitcombe is a fun guy. Known for his hearty work ethic, disarming waggishness, and the husband of “The Lady who walks the Black Standard Poodle,” it only takes a few minutes into a conversation with him to realize that he’s the kind of neighbour you will want to get to know more.

Neighbours of Olde Oakville sat down with him this month to give readers a candid glimpse into the life of a man who has built a successful career, a close-knit family and, as the new board chair for the Oakville Community Foundation, is ready to come alongside Oakville’s philanthropic community and provide opportunities for them to help Oakville prosper. 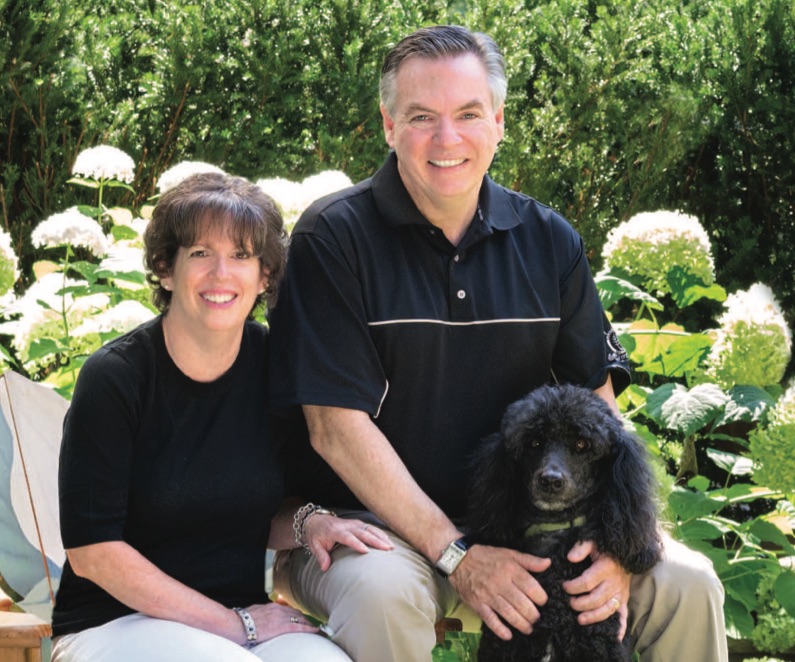 Let’s start with your wife Dianne. We have heard she is an amazing person. How did you meet her?

I was attempting to get Dianne’s roommate, a work colleague of mine, to go on a date. She politely declined (actually, I think the exact words used were, ‘NEVER GONNA HAPPEN’) and then offered up her roommate, Dianne. That lead to a blind date. We were married in Ottawa (Dianne’s hometown) in 1991.

Last year, we celebrated our 25th wedding anniversary with a river cruise up the Rhine River. Pretty much every week Dianne says to me, “I want to do another River Cruise!”

Tell us about your children Michele and Matthew. What are they doing now that they are young adults?

Michele, 21, is our “theatre kid” and Irish dancer. She is entering her final year of Queen’s Bachelor of Commerce program (she understood that pretty much anything you do as a career, including acting, has a business component to it!). She recently spent a summer working as a character actor at Disney World where she was officially a “Friend of Poo.” This summer she is studying at Guild Hall in London.

Matthew, 23, was a very good ice hockey goalie during his youth. He attended Oakville Trafalgar High School and in May graduated from St. Francis Xavier University with a degree in Business Administration. He recently moved to Lindsay, Ontario to start his career working in the finance department of DLF Pickseed.

We are no longer spending our time in hockey rinks, soccer fields or dance studios. We now connect with our neighbours by walking our dog in the neighbourhood. We have owned a Black Standard Poodle for the past 17 years; hence, Dianne is often identified as “The Lady who walks the Black Standard Poodle.”

(Chuckle) Do you have any other pets?

The incumbent is Nike who was featured in a book called Dogs of Oakville, so he is the local celebrity of the family. In 2009, Dianne also rescued Daisy, a Miniature Poodle, from the Oakville and Milton Humane Society. She was not in good health and only lived for two more years; however, she made a lasting impression on all of us during that short time.

Anything else interesting about you that people may not know?

I was one of the founding investors in Steam Whistle Brewing Company back in 1998. I still “play with cars” and have restored a 1955 Austin Healey and am currently working on a 1973 Porsche. Also, I am a fan of Charles Schultz and a collector of Tom Everhart artwork which features the Peanuts Gang. I often tell others that I learned everything I needed to be successful in life from reading the Peanuts Comic Strip. Charlie Brown is the model of resiliency and empathy, which I believe are two of the most important character traits.

You live in a very unique Dutch Colonial style home in Brantwood Survey, which was the Town of Oakville’s first official subdivisions. Tell us a bit about it.

We took possession on January 15, 2000. This was my “Y2K Project.” We pushed the closing to January 15th – thinking that two weeks should be enough time to fix all the world’s computers should they fail on January 1, 2000.
My Uncle Claude (who owned Claude Heimler Footwear in Downtown Oakville) and Aunt Helen lived on Watson Avenue. When I indicated that we were considering a move to Oakville, Aunt Helen started a discussion about downsizing and selling us their home. During one gathering she asked, “Do you think you would renovate the house or just leave it as is?” She was very proud of her home. I responded, “I’m going to knock it down and am talking to an architect about the rebuild.” This was met with abject horror and the prompt suggestion that there was a house for sale one street over on Douglas that should be torn down. We checked out the house on our way home and bought it three days later.

The house is a Dutch Colonial style and has a “shed roof.” Because of the roof, some neighbours have thought it was originally a barn that was converted to a house. Our home was built (as a house, not a barn) in 1906.
We receive compliments on our landscaping which was the vision of Oakville resident Gabe Constantini of Intriguing Landscapes

Great story! So, did you grow up in Oakville?

My family moved to Oakville in 1968. I caught frogs and turtles in 16 Mile Creek and rode my bike to Hopedale Mall when it was an open strip plaza. I played hockey and rep baseball and had an Oakville Beaver route which paid $1.00 to deliver 100 papers. Then in 1975, my family moved to New Brunswick. Regardless of where I have lived, I have always considered Oakville as the place I came from.

You were recently announced as the new Board Chair for the Oakville Community Foundation, which is fitting considering you and Dianne both have a lot of experience with philanthropy. What organizations have you served?

I am a Board Member of MLSE Launchpad in Toronto, a centre for youth development through sport. I have been the Honorary Solicitor for The Arthritis Society since 1996. Dianne (also a lawyer) was a board member of the Oakville & Milton Humane Society for six years and has been a dedicated volunteer at St. Mildred’s-Lightborne School for 17 years. She currently volunteers at OTMH.

What have you learned along the way?

People often equate philanthropy to writing cheques. I have learned that for me, it is more personally rewarding to become directly involved with charitable organizations and offer my time and experience to help them achieve their goals.

How and why did you get involved with the Oakville Community Foundation?

A friend, Carole Crotty, introduced me to the Foundation. I thought that joining the Board was an opportunity for me to “give where I live”. I grew up in a very different Oakville than exists today. My time with the Foundation has opened my eyes to the varied needs of our community as well as the number of incredibly committed people who are helping others daily, some by writing cheques and others by contributing time.

Now that you are Board Chair, what are your goals?

I am honored to be elected Chair of a very dedicated Board, who in turn provide support to a very talented and dedicated operational team lead by Wendy Rinella. The Foundation plays an important role in addressing the social, economic and environmental challenges in our community. It is a resource for non-profit, civic, government and philanthropic organizations. It provides leadership, expertise and capital to help address social issues.

My primary goal is to continue to increase the awareness of the Foundation in the community and by extension increase the amount of funds available to support charitable giving.

To continue the conversation with Michael and hear more about vintage cars, Black Standard Poodles or connect with him regarding Oakville’s philanthropic opportunities, email him at michael.whitcombe21@gmail.com. Make sure to ask him how Ben & Jerry’s ice cream inspired one of his life’s mottos, “If it’s not fun, why do it?”

Learn More About Starting a Fund