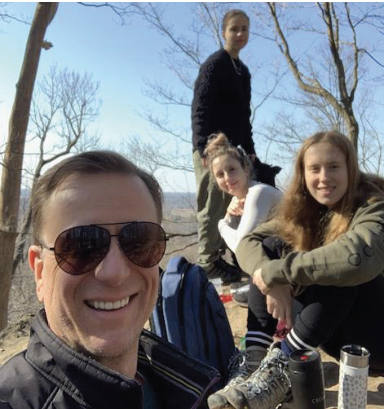 “When you help other people you’re also helping yourself.”

One of The Foundation’s newest Fundholders, Rudy Peternelj learned at a young age the importance of giving back. Today, as a busy father of three teenage daughters and with a thriving career, Rudy wanted to make sure he carved out time for philanthropy. With the help of The Foundation and the commitment of his daughters, Rudy is able to meet his charitable goals and build community in the process.

Learning from the Best
It’s no surprise that Rudy’s philanthropic values were instilled in him by his parents. The son of Slovenian immigrants, Rudy was born in Toronto and moved to Oakville at the age of 10 where his father started his business and has spent the majority of his life either living or working in Oakville ever since.

“My parents have always been very generous and I was always impressed and inspired by them,” recalled Rudy. “When their friends had tough times they were always willing to help and lend a hand.”

With his father building his very successful business, Industry Diesel, Rudy understood very early on the value of helping others who were less fortunate than his own family.

Rudy’s mother Josie was quick to jump to the aid of a family from their church who had lost their home due to a gas explosion. She was always willing to provide support to anyone who was in need, whether it was giving clothes or opening her doors for people to stay. His father, Albin, had a similar giving nature. Rudy recalled how his father would repair car parts free of charge through Industry Diesel in support of charity.

From his parents’ example, it was obvious to Rudy that there was something important to be found in helping others, “when you do something and you don’t expect anything in return, it just makes you feel good.”

A Multi-Generational Legacy
Inspired by the giving spirit he grew up with, Rudy knew he wanted to engage in philanthropy wherever he could, but most importantly he wanted to make sure he passed this legacy of giving onto his three teenage daughters. “I always wanted my kids to get involved with charitable work and be conscious of what they could do in their community,” said Rudy.

As a long-time subscriber of The Foundation’s email newsletter, when he was ready to create his own Fund, he knew exactly where to go. After discussing his options, Rudy decided to open a Donor-Advised Fund with The Foundation.

A Donor-Advised Fund functions much like a private foundation and provides the Peternelj’s the freedom to grant to any registered charity in Canada every year. Rudy said he appreciates The Foundation’s streamlined process and the tailored list of charities based on the Peternelj family’s philanthropic interests that were provided.

The Fund, called the CARE Peternelj Fund, is named for the first initials of Rudy and his three daughters; Charlotte, Anastasia and Elizabeth, with the goal of the Fund to support the charities he and his daughters feel passionate about.

Creating Bright Futures Rudy’s daughters took it upon themselves to carefully explore the charities they wanted to support. “They did some research and found charities that they felt needed the most help and I was impressed with how thoughtful they were what they chose,” said Rudy.

In the end, Anastasia, Charlotte and Elizabeth chose to support charities that are geared towards supporting youth in our community. After careful research, the girls pinpointed the growing issue of youth homelessness and the growing mental health crisis amongst young people. “They know that kids out there need help,” said Rudy, “They are lucky to have a family that supports them. But some kids don’t. It’s nice to be able to support where others need it.”

Rudy explained that he loved the personal approach The Foundation provides for their Fundholders, “when we received the first couple of notes from the charities it was really heartwarming for my girls to see.”

Most of all, Rudy hopes that the spirit of giving will continue on in his daughters. When asked what he hopes his own legacy will be, Rudy replied, “that I’ve instilled values in my kids and that they grow up to be good people.”

Welcome back to the #WeekendReads series! On periodic Fridays throughout the year, the Oakville Community Foundation will share reports, data and information to help you stay informed when it comes to the community, the charitable sector and more. Click here for previous installments. Last summer, Canadians from coast-to-coast filled out the 2021 Census: a detailed […]

FOR IMMEDIATE RELEASE Oakville, Ont., March 16, 2022- The Golden Horseshoe Hub in Southern Ontario announced today they will work together to distribute $1,104,114 to transform public spaces in response to COVID-19 in the second round of the Canada Healthy Communities Initiative. The Hub is led by Oakville Community Foundation and is a consortium of […]

FOR IMMEDIATE RELEASE  Oakville, Ont., March 7, 2022 – The Oakville Community Foundation has launched a new online course to the local charitable sector. The course is focused on diversity, equity and inclusion (DEI) and has been co-developed with Enable Education and in collaboration with local community partners. Through the course, participants benefit from the […]