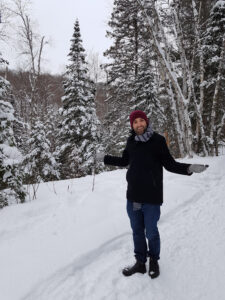 Dan Ierullo is The Foundation’s  Accountant, who joined us in October of 2019. Originally from Toronto, Dan currently lives in Hamilton with his wife, Erin and their sheepadoodle Archie. Dan’s main responsibilities at The Foundation include preparing financial statements, gathering and reporting investment data, facilitating and coordinating payments to grantees and preparing financial reports for the Board.

To develop his financial literacy, Dan attended Brock University where he obtained a Bachelor of Economics degree. He then went to Mohawk College where he completed a certificate in Accounting and Business Management.

Dan started his professional career with the Tech Company L3 Wescam before moving to Alectra Utilities as a Data Analyst. From there, Dan went on to work as a Financial Analyst and assistant controller at McClelland Premium Imports, which helps import Stiegel and Erdinger beer into Canada. He’s had a well rounded career already!

Fortunately for The Foundation, he then found his way to us! Dan says that his goal was always to end up in a non-profit organization, and was excited when he saw an opening come up here in Oakville. While he wasn’t familiar with the community foundation model,  Dan says he was immediately inspired by our initiatives, reports, and how local philanthropists could work together to make a real difference in their community.

“Some great advice I was given early on, was find your way into a room with people you admire. I not only get to do this with The Foundation team, but with our incredibly accomplished Board of Directors as well,” says Dan. “It’s easy getting up in the morning, knowing you’re working with a team who are motivated to help the community every single day.”

Dan is especially excited by the work The Foundation is doing this year with Donovan Bailey! When he was a kid, he actually met Donovan at a track and field meet at York University. A bunch of people lined up for his autograph, and Dan, not having anything for him to sign other than his shoes, ended up with a pair of sneakers autographed by the world’s fastest man! Of course, he got to meet Donovan again after our Brighlights Gala in 2019. “I think when I told him this story, it made him feel old,” says Dan.

Outside of the office, you can find Dan visiting family and friends (pre pandemic of course), exploring trails, dabbling in the guitar and piano, watching episodes of “Beat Bobby Flay” or cheering on the Leafs as they disappoint him yet again. Dan also wanted us to let everyone know his favourite film is in fact The Shawshank Redemption and not The Mighty Ducks (it’s totally The Mighty Ducks).

Dan is immensely kind, has a great sense of humour, and is always up for anything we throw his way! In fact he was recently crowned The Foundation’s Snow Angel Champion of 2021. Is there anything he can’t do? We are so grateful to have Dan as part of our Team and hope you get to meet him in person at a Foundation event soon.

Get To Know Dan Ierullo!

Welcome back to the #WeekendReads series! On periodic Fridays throughout the year, the Oakville Community Foundation will share reports, data and information to help you stay informed when it comes to the community, the charitable sector and more. Click here for previous installments. Last summer, Canadians from coast-to-coast filled out the 2021 Census: a detailed […]

FOR IMMEDIATE RELEASE Oakville, Ont., March 16, 2022- The Golden Horseshoe Hub in Southern Ontario announced today they will work together to distribute $1,104,114 to transform public spaces in response to COVID-19 in the second round of the Canada Healthy Communities Initiative. The Hub is led by Oakville Community Foundation and is a consortium of […]

FOR IMMEDIATE RELEASE  Oakville, Ont., March 7, 2022 – The Oakville Community Foundation has launched a new online course to the local charitable sector. The course is focused on diversity, equity and inclusion (DEI) and has been co-developed with Enable Education and in collaboration with local community partners. Through the course, participants benefit from the […]