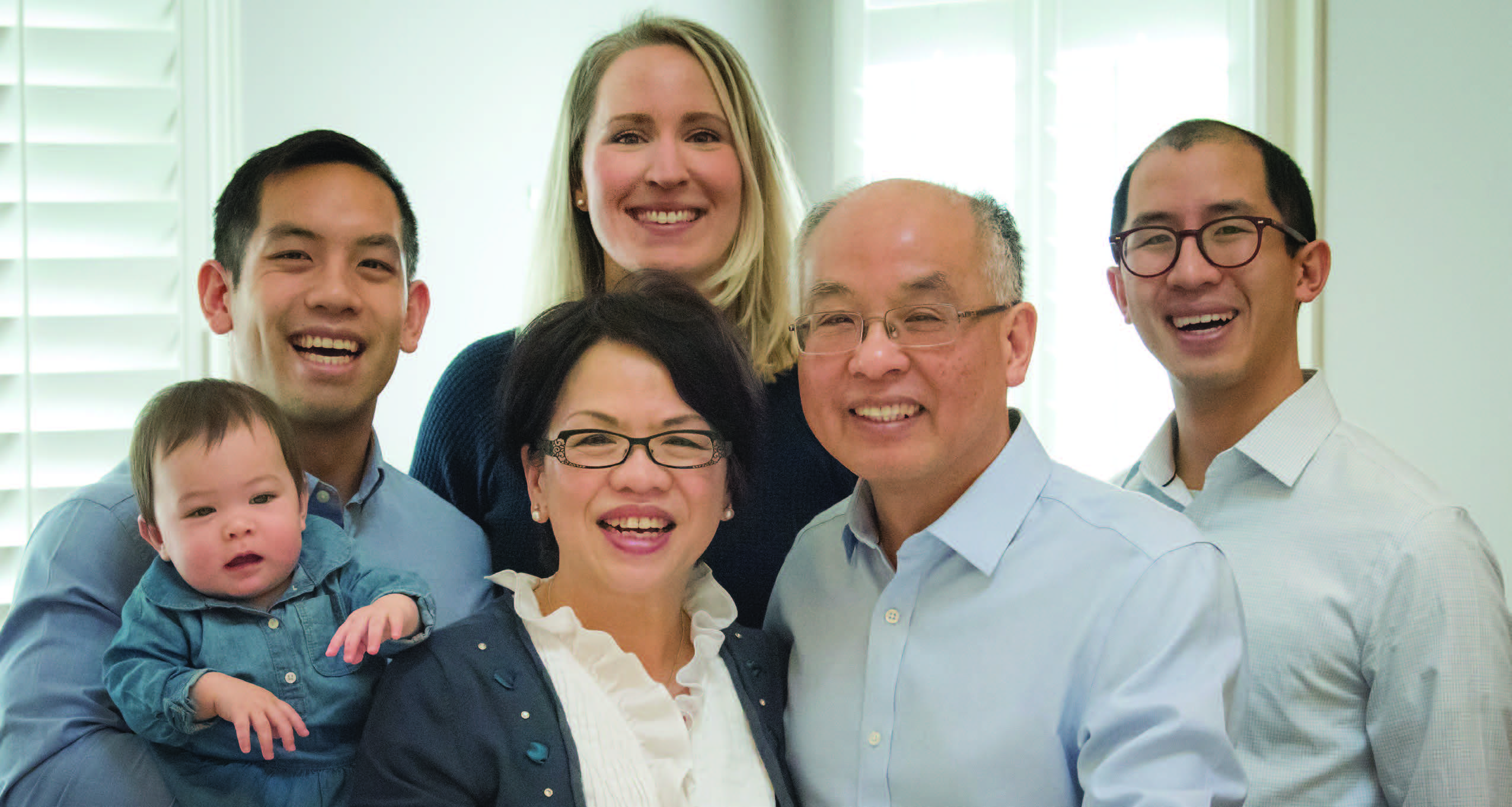 It was destiny that brought us together,” says Mary Lui when asked about how she met Alex, the love of her life and her husband of 33 years. “During one of my trips from Hong Kong to Toronto, I decided to visit my sister and friends in Alberta who had moved out there at the height of the oil boom. I was at a friend’s dinner gathering and there was this young man who started talking to me about things to do and see in Alberta. He offered to take time off work to show me around during my visit (Alex was completing his family medicine residency in Edmonton at the time). As a nature lover, I obviously did not turn down the offer!”

Absorbed by the majestic beauty of the Rockies with its alpine meadows and turquoise lakes, Alex and Mary hiked up trails, toured the National Parks and scenic spots in Kananaski County as they shared stories and got to know each other better. Eighteen months later, in the fall of 1984, they got married and settled down in Calgary where they had two boys, Adrian (who is now 32) and Austin (who is now 30).

When recession hit Alberta in the 80’s, the Lui family decided to return to Ontario. They bought a house in Mississauga during the peak of the housing bubble, but decided in 1992 to move to southeast Oakville to be closer to Alex’s medical practice.

“Alex had just taken over a family medical practice from a retired doctor. He worked long hours providing what used to be small town medical care to his patients including obstetrical care, house calls, clinic duties, and daily hospital rounds,” remembers Mary. “We moved so we could be within walking distance to the Olde Oakville Hospital and so the boys could go to the local school.”

The Lui family has been in the neighbourhood for 26 years now. “We love our friendly neighbourhood and the close proximity to downtown Oakville and always feel blessed to live in and enjoy such a lovely community,” says Mary.

Life is good; however, Alex and Mary are quick to mention that it was not always so ideal. “We came a long way from a humble beginning,” says Mary.

Alex was born in Guangdong province in southern China but grew up in Hong Kong. He came to Canada on a student visa to pursue higher education and completed his final year of high school in Windsor.

“Studying abroad as an international student with limited financial aid was a real challenge,” says Mary. “Alex could share many stories about his struggles trying to make ends meet and learning the culture.”

With limited proficiency in English, Alex had a hard time understanding what his teachers were saying and teaching in class. He remained steadfast, though, and thrived in math and science despite it all; he was even nominated to compete in the Math Olympics. He won numerous awards and used this as a way to connect with his peers in the school by volunteering to tutor them in math. Tutoring also gave him a chance to practice and improve his English.

In 1973, the year he graduated from high school, he received permanent residency under the Canadian amnesty program which allowed him to stay in Ontario for his post-secondary education. He obtained his doctorate degree in medicine from the University of Western Ontario in London and completed his internship and residency at the University of Alberta.

After a full career as a doctor, Alex responded to a call for physician preceptor at the new Mississauga Academy of Medicine (at the University of Toronto’s Faculty of Medicine in partnership with Trillium Health Centre).

“It is a wonderful feeling to be able to share my knowledge and practical experience with students entering the medical field in a way that they may not be able to encounter in classroom,” says Alex.

Mary was born in Hong Kong during the British administration. She immigrated to Canada in 1980 with a diploma in Business Administration and Management and work experience at an International British law firm. She was proficient in English, so getting her first job in Canada was not a challenge. Convinced by Alex to move out to Alberta, she left her position in marketing at Manulife’s headquarter in Toronto.

“As I look back at how my life changed for the better in Canada, I am very grateful,” Mary says.

After marriage, Mary became the office manager for Alex’s medical clinic, providing patient support and coordinating care services. Those who know her best say she is loved by many for going beyond the call of duty.

“I learned to listen and just listening, though simple, is powerful,” says Mary. Patients would often share their experiences and feelings with her and come to her for advice when their children were having trouble at school or when there were intergenerational conflicts or parent-care issues. She became a source of wisdom, comfort and encouragement, especially for families from China trying to adapt to the new Canadian culture. “Some patients treated us a part of their families; their stories often touched our lives deeply and changed how we see things in life. “

Over the years, Mary became a true community advocate and devoted herself in promoting multiculturalism, fostering understanding and interaction between Chinese communities in Halton and society at large. She served as co-chair of the New Central School Council, vice-president of the Halton Youth Symphony and founding executive and former president of the Halton Region Chinese Canadian Association. She also worked to raise funds and awareness for local charities, including the Oakville Community Foundation and the Oakville Hospital Foundation. She currently serves on the Board of the Oakville Community Foundation and on the Capture Oakville Committee with the Oakville Camera Club (photography is one of her hobbies).

Their older son Adrian attended Oakville Trafalgar High School (OTHS) and played on the school’s well-known rugby team. He went on to earn a degree in Kinesiology at University of Waterloo, where he was captain of the rugby team. He then earned a scholarship to complete his masters in Kinesiology at Brock University. In 2008, he was selected to play in the Men’s Rugby FISU Games (International University Sport Federation) in San Diego and went on to compete on the National University Men’s 7 team representing Canada at the FISU World Championships in Cordoba, Spain.

While attending university, Adrian was intentional about staying connected to the local community in Oakville, and returned to his high school to volunteer and coach the OTHS boys’ and girls’ rugby teams. Their hard work paid off when the OTHS girl’s rugby team won their first-ever gold OFSAA championship in 2012.

“Words can’t really describe it. It’s one of the best feelings in coaching,” said Adrian about being on the volunteer coaching staff of the championship team. “I saw them come in as Grade 9s and taught them to pass the ball backwards then watched them grow into leaders on and off the field. They knew exactly what they had to do and how to do; that sounds easy, but at the level they have to play at to win this, it’s very difficult.”

Adrian now teaches at Abbey Park High School and continues to coach the high school boy’s rugby team. He is also a co-owner of Tidal CrossFit gym in Burlington where he coaches clients on weekends and after school. He is married to Gaby and their daughter Avery is nine months old.

“We are very fortunate that his family stayed in Oakville, and we get to see our granddaughter more often!” says Mary, now semi-retired, and thoroughly enjoying spending time with her granddaughter.

Alex and Mary’s younger son Austin completed his undergraduate degree in music at Western University. He was also a scholarship recipient which allowed him to complete his Master’s degree in Music and Culture at Carleton University where he did his thesis paper on the role of music in community development. He is currently working on his Master’s degree in Community and Regional Planning at the University of British Columbia. His passions include affordable housing, local economic development, and civic participation. On top of his full-time studies, he is the Project Coordinator for “The Lux” space in Vancouver, which is a low barrier, income-generating hub for people living in the Downtown Eastside. He has volunteered with many registered charities and projects, including the Vancouver Foundation’s Neighbourhood Small Grants Program, Ottawa Architecture Week, The Otesha Project and The Leading Note Foundation’s music program. He says he looks forward to returning to Ontario and hopes to be able to contribute innovative solutions for the complex issues facing the affordable housing and local economic development in our community.

Accomplished and well-situated, the Lui family remains passionate about helping others, especially newcomers who feel lost and unfamiliar with Canada’s culture, social services and healthcare system.

“Canada has provided me lots, including an education and great opportunities,” says Alex, who serves as a Panel Physician for Immigration, Refugee and Citizenship Canada. He has been providing services to immigration applicants in Halton for over 20 years, a service that is especially needed now with the government’s recent announcement of a new multi-year plan to increase the number of immigrants. “It is a wonderful feeling to be able to give back.”

“Life is a journey. We must try to stay active and engaged and keep learning,” says Mary. “Diversity is strength; we want to be a bridge that helps bring people together and be a part of making our community a better place to live.”

Learn More About Starting a Fund