Welcome back to the #WeekendReads series! On periodic Fridays throughout the year, the Oakville Community Foundation will share reports, data and information to help you stay informed when it comes to the community, the charitable sector and more. Click here for previous installments.

Last summer, Canadians from coast-to-coast filled out the 2021 Census: a detailed statistical portrait of our country and its people by their demographic, social and economic characteristics.

Throughout the year, Statistics Canada will periodically release data gleaned from the census that will show us the trends, anomalies and interesting bits of data that can then help to inform our work. The previous 2016 Census has already informed many of our research reports, which can be read here.

Sources can be found here or by clicking the superscript within the text.

How has Oakville changed? 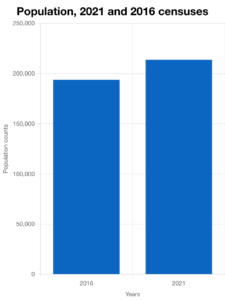 When we look at census data, we like to compare where we were four years ago to where we are now. Since 2016, the population in Oakville has increased by 10.3% to more than 213,000 people. The increase in Oakville is nearly twice both the provincial average (5.8%) and the national average (5.2%).

Oakville now ranks 11th among provincial populations and 25th among national populations, and had the second biggest increase in Halton behind Milton (20.7%). 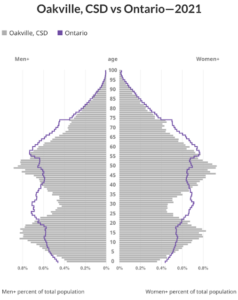 What else are we seeing?

What does this mean?

Based on the data, we know that our population will continue to grow and change as we look to the future.

We know that we have a higher population of youth in Oakville than the provincial average and need to continue to find ways to support them. Consider donating to our Community Classroom Fund which supports students in publicly-funded schools in Oakville, as well as Mississaugas of the Credit First Nation students at Lloyd S. King Elementary School, experience a local arts, culture, heritage or environment program for free.

As more Oakville residents get closer to retirement age, and more Canadians are 85+ than ever before, we know we need to continue supporting charities that help older adults. Explore the charities in our community that are working to assist older adults as they age. To start, take a look at our report, Living Your Best Life: A Report on the Vitality of Older Adults in our Communities